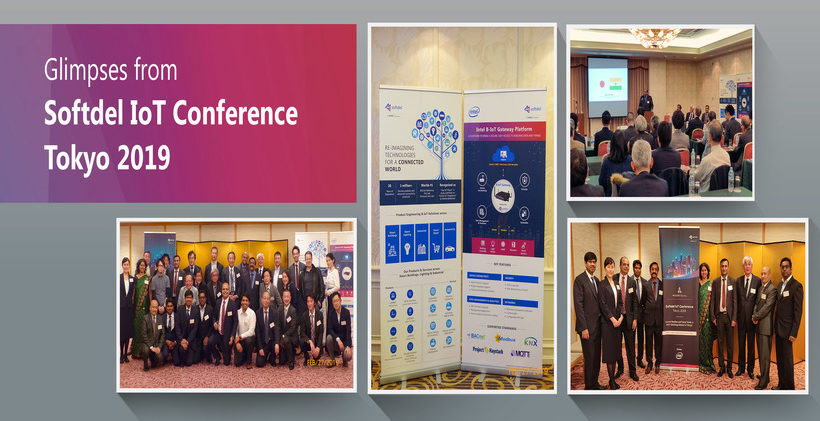 Softdel, along with its partner Intel, hosted its first IoT Conference on February 27, 2019 in Tokyo. The conference brought our OEM customers and partners together, to discuss and learn about technologies, latest trends and disruptions impacting the building and industrial automation space.

Japan is one of the largest economies in the world with an exceptional culture and a legacy of technology innovation. Mr. Sunil K. Dalal (Chairman and Managing Director, UNIDEL) covered the history of Japan-India relations, from culture and security to economy, trade and FDI. “Softdel’s strong Building and Industrial IoT capabilities, core values and a decade long presence in Japan have helped us gain the trust of Japanese customers and build long lasting relationships” said Mr. Dalal. In another session, Mr. Naoyuki Maekawa (Director Invest, JETRO- Japan External Trade Organization) spoke about JETRO’s overall work in promoting mutual trade and investment between Japan and India. In keeping with the theme of the conference, keynote presentations were focused on emerging technologies.

Buildings IoT (B-IoT)- Innovation to make buildings smarter and more intelligent IoT, Cloud and AI will be key driving forces in laying the foundation for buildings in the future. Softdel Team gave the audience a glimpse of the future of B-IoT. They elaborated on key IoT use cases, adoption, overall B-IoT ecosystem, challenges and the readiness of BACnet for B-IoT.

Lighting IoT (L-IoT)– Beyond light, to LiFi and more According to Gartner research, Smart Lighting has the potential to reduce energy costs by ninety percent. Mr. Umesh Suryawanshi (Director Technology, Softdel), described the evolution of lighting, sharing energy savings facts, details of adoption across industries and emerging trends in the lighting space, including Li-Fi, Bluetooth-mesh and so on.

An Insightful Event Softdel received great feedback, with several attendees commending the quality of speaker sessions and appreciating the networking opportunity. They described the speaker sessions as highly insightful, giving them clarity about use cases, untapped market potential and technology possibilities to build future solutions in a smart and connected way. Our next annual Softdel IoT Conference will be held in early 2020 and we look forward to your presence. We will keep you updated with the details.

find out how softdel can help
your business grow